Also EC introduces expensive encoding and transferring costs when writing or reading data. As a result, more CPU and disk I/O will be used. But thanks to ISA-L and some lib, encoding in cache is quite fast. So usually, encoding is not the bottleneck in a carefully designed EC system.

Why we need EC in hot storage?

They implement this on Alluxio. 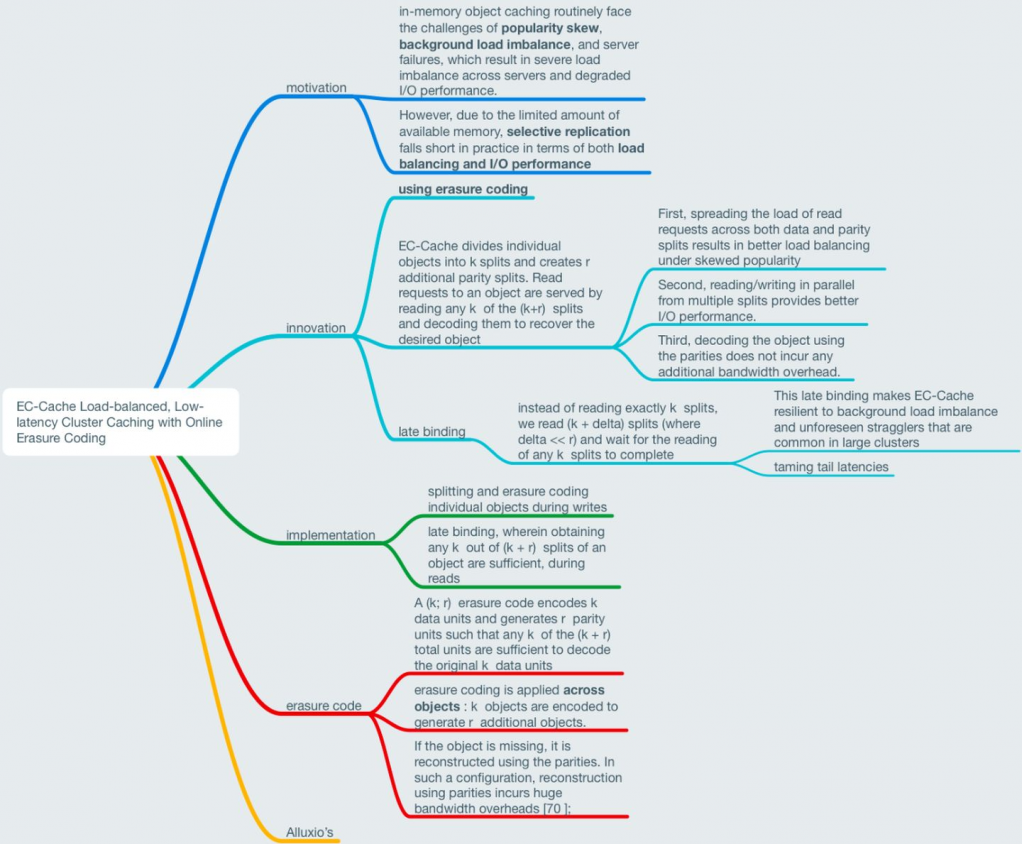 this pic is from 朱乐乐 in zhihu

mainly find the best num of EC slices(the $k$) based on data hotness and size. like the hotter, the bigger $k$ may be needed.

Just like MemEC, there are excessive updates on metadata

this is pic is from their slides.

EC-GROUP is the basic component: 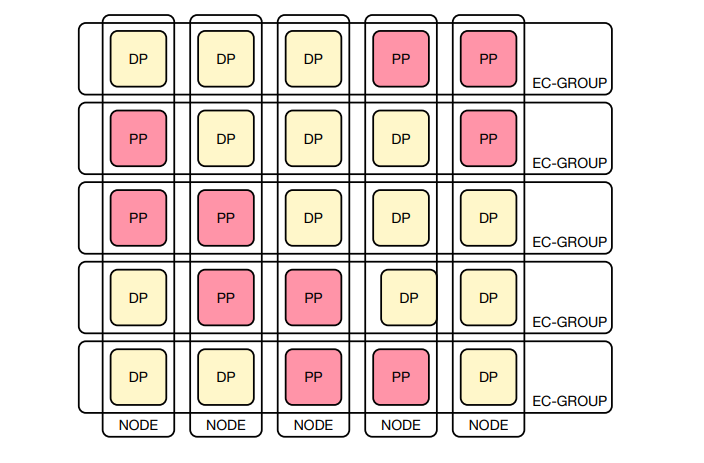 To prevent 2-RTT when updating parity nodes, they used a piggybacking method, which combines data with a monotonously increased xid. When a parity node receive a xid, all smaller xids and the corresponding data in the buffer will be committed.

MemEC, which applies EC for big values of KVS.

To save storage cost while keeping availability, some researchers use EC for large data (like value).

but if value is too small, then MemEC encode the whole objects. And one chunk (4KB) is related to multiple [metadata, key, value] pairs.

Once the size of a new chunk reach its limit, it will be sealed. And only sealed data chunk will be encoded. Also, data in chunks can be updated unless the size is larger than the limit. Because of linear combination, the cost of updating parity chunk is small.

Chunk and object index maps are based on cuckoo hashing. A full-stripe update version of Cocytus.
Batched coding: update in serveral new full stripes to trade latency for BW.
GC: full stripe update leads to invalid blocks, so GC is needed. To efficiently merge those partial valid stripes (less movements), the rule is merge the stripes with less valid blocks to those with more valid blocks. To make the distribution of invalid blocks more concentrated, the blocks in those updated new stripes are ordered by hotness.

They claim that the latency in queuing is not that great as big BW. ECHash keeps mapping in old data node to new data nodes. (they called it sub-trunk, a smaller granularity than chunk) As a result the coding pair is not changed, so no need to update parity.

But in the fig above, d and h are in the same node, while they shouldn’t be. What’s worse, the scaling process itself will bring unavailability.

So how to ensure sub-chunks in different new nodes after removing and availability during scaling?
To cover this, they introduce multi-hash-ring, such that scaling only occurs at $n-k$ hash ring at a time.

Seems like it will add weird contraints to scaling.. 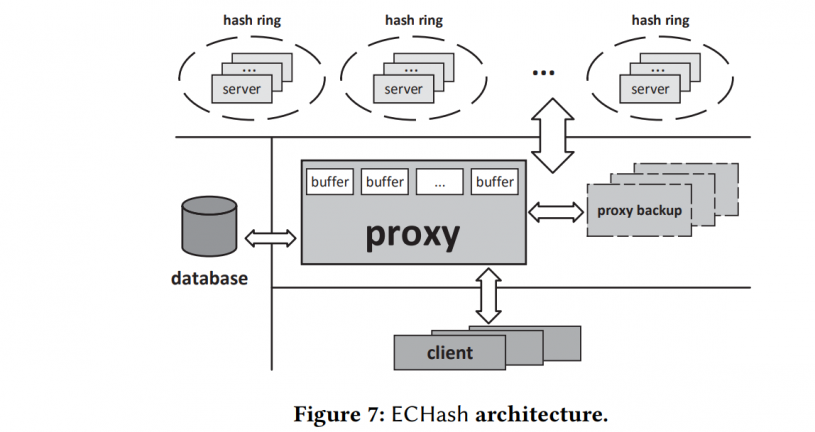 Proxy bottleneck? quote “We emphasize that the proxy is not the bottleneck in the scaling process, as the scaling performance mainly depends on the object migration and parity update overheads”

Note: GC (in batch)? the cost of precise repair?

This work is from ETH Zurich. Ring provide a resilient storage scheme for KVS with combining replication and EC. It built Stretched RS code to ensure the same key to node mapping for a range of RS codes with different $k$. 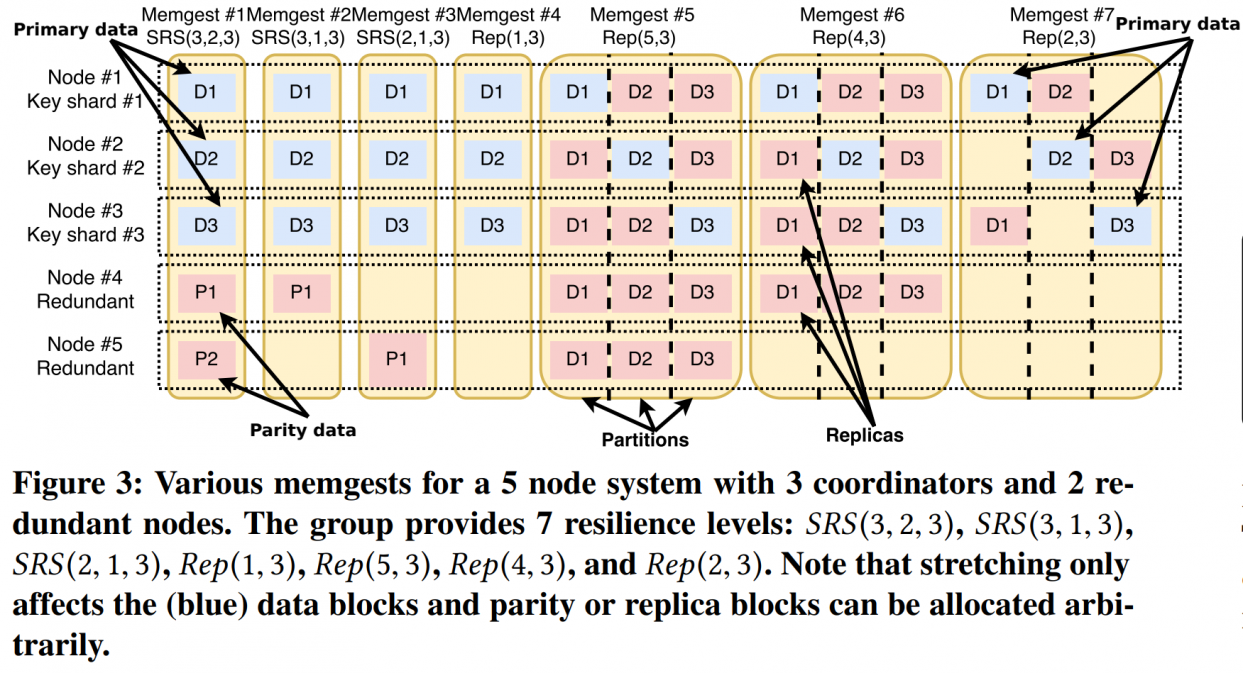 So that we can combine many storage schemes w/o changing the node layout, and access them with a unified key to node map.

I will choose an 黄道吉日 to update the second part, including the following papers :)

Some combined RDMA with EC..

And this one focused on availability in serverless in mem cache