Due to RDMA NIC implementation, RNIC doesn’t have remote persistent flush primitives. So one-sided write data from clients will write to the volatile cache on RNIC first and then RNIC directly sends ACK back before writing data to PM. As a result, a power loss will break remote data persistence easily.

Besides, one-sided commit[3] is immature or suffers poor performance.

Some researchers place this problem on the network systems level instead of the storage system level, and so ignore it. But for now, this problem does affect system availability.

2-side RPC communication can avoid this problem, but 2-side ops can’t fully deposit RNIC’s performance and lack of scalability at the same time[1].

For 1-side ops, a strawman implementation is sending a write request followed by a read request. But the cost of 2 RTT is still too high. 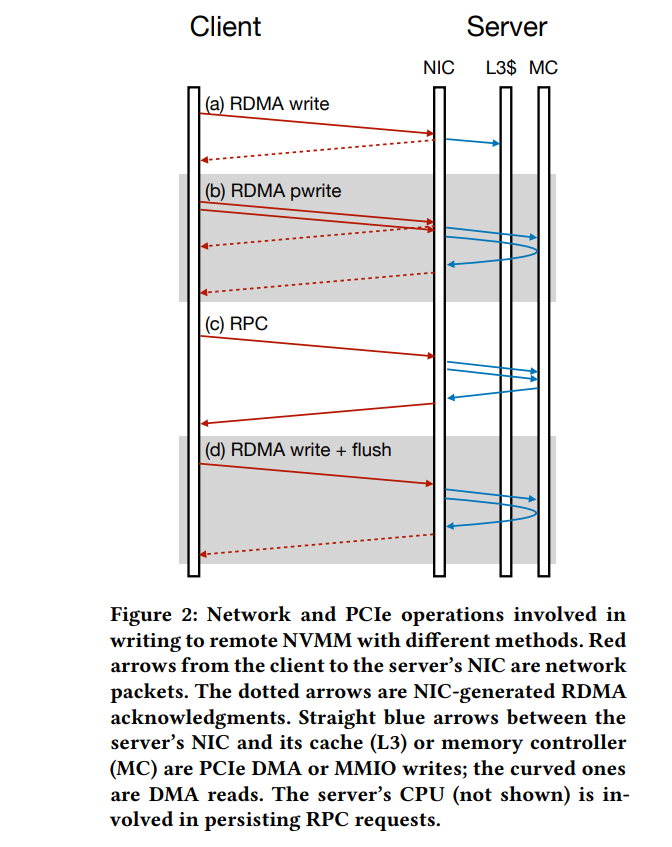 [1] uses READ after WRITE, but with outstanding request[2] + doorbell batching[8] to process persistent WRITE request, which reduces latency from 4μs (2RTT) to 3μs.

quote “Specifically, outstanding request [23] allows us using the completion of READ as the completion of the WRITE, as long as the two requests are sent to the same QP. Since the READ to persist the WRITE must be post to the same QP as the WRITE (§2.3), we no longer need to wait for the first WRITE to complete. Thus, this optimization reduces the wait time of the first network roundtrip. Applying outstanding request to persistent WRITE is correct because first, later READ flushes previously WRITE [19], and RNIC processes requests from the same QP in a FIFO order [6].
Based on outstanding request, doorbell batching [24] further allows us to send the READ and WRITE in one request using the more CPU and bandwidth efficient DMA, reducing the latency of posting RDMA requests.
On our testbed, a single one-sided RDMA request takes 2µs. Thus, a strawman implementation of remote persistent write uses 4µs. After applying H9, one-sided remote persistent write takes 3µs latency to finish”

[4] claims that for small persistent writes to remote NVMM, RPCs have comparable latency as one-sided RDMA.

[5][10][11][12] use the RDMA WRITE_WITH_IMM verb to achieve remote persistence. So that servers will get the completion status and make data durable immediately.

note: WRITE_WITH_IMM can ensure atomicity since the data need to be confirmed by the extra involved server. On the other side, this imm is only 32-bit, which can’t directly address the complete space.

like tranditional DB systems, there are some optimistic methods, like using redundancy check. [6] do CRC when reading to check data consistency.
To go a step further, [7] argues that CRC is expensive so they use a background thread to conduct integrity verification. (but this work is based on simulation…

check their brief intro in [9].

their work still relies on the existing RDMA primitives and the receiver’s CPU to emulate RDMA RFlush primitives instead of programmable NIC.