RocksDB based on LSM-Tree is widely used in Facebook. This work aims to model and analysis RocksDB workloads at Facebook.

for UDB and ZippyDB, GET requests dominates.

the standard deviation of key is relatively small while the deviation of value is large!
And values in UDB is larger than others about 3 times. (because Posts is big like a image or something

In ZippyDB, most of data is around 50 bytes or 90 bytes. Similar in UP2X, the key size is around 10 bytes.
But when it comes to UDB, some are fixed around 10~20 bytes, while some related to the association’s secondary index can be very large (>100bytes)! Since we need to use those information to do iterate

Same with previous works, they find QPS have a strong diurnal pattern.

less than 5% of data are accessed during 24 hours. in other words, most of data are cold.

In UDB, 70% of data are write once without any update.

the stair in ZippyDB’s graph reveals that some of keys are often repeatedly selected as the start key to do iterate.

have a small hotspot here? 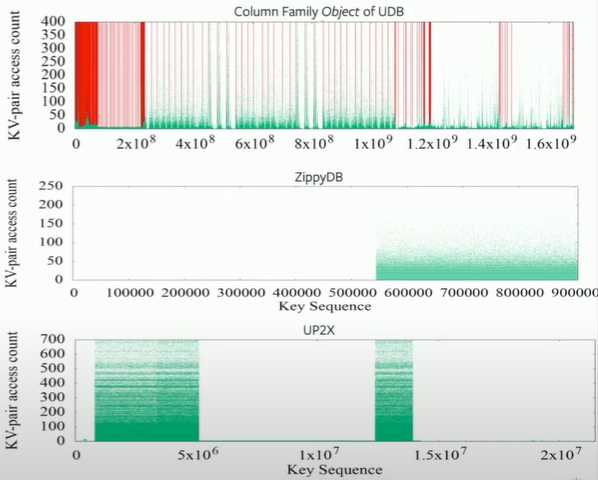 Also, for some query types, temporal locality is clear.

Workloads generated by YCSB will lead to smaller write amplification and more reads compared with real workloads.
(because rocksDB is build upon a filesystem, those static data are collected on file system level)

The reason is hot keys is randomly put in key-space. This uniform distribution will cause more cache replacements, aka more reads.

How to deal with it?
Instead of only modeling the overall space, they cut space into pieces. In each piece, workloads follow the uniform distribution, while keep locality on the piece level.

it doesn’t make sense… since the logical, semantic distance is not key-address distance. Through it may cause similar read and write ratio on file system level, it’s still not REAL.
especially for structured key like in UDB

And based on this design, they bring some new benchmarks.

All tools and benchmarks are open sourced on Github.